Lucifer, the series that started on Fox, concludes September 10 on Netflix for its final season.

Tom Ellis returns as the titular Lucifer Morningstar, the Devil, who decided to take a break from being King of Hell to enjoy some time on earth when the series began in 2016. Originally on Fox who canceled the series after 3 seasons, it was picked up by Netflix originally for 2 seasons. The success of the show on Netflix convinced the streaming service to give it 1 more season which debuted September 10, 2021 with all 10 episodes ready to binge.

Lauren German co-stars as Detective Chloe Decker who falls in love with Lucifer she originally thinks uses the role of “the Devil” as a metaphor only coming to realize he is the one and only devil as the series progressed. The series also stars Lesley-Ann Brandt as Lucifer’s right hand demon Maze, Rachael Harris as therapist to the Devil Dr. Linda Martin, Aimee Garcia as Ella Lopez, LAPD Forensic scientist, Kevin Alejandro as Detective Dan Espinoza, and D.B. Woodside as the angel Amenadiel.

The often quirky series went in an unexpected direction in season 5 bringing in God and a war for his power over heaven and earth when he decided to retire (to the void dimension his ex-wife, the Goddess of All Creation, rules thanks to Lucifer season 3). Lucifer won the war and the right to ascend as God to rule the Silver City (Heaven) and all creation.

Season 6 picks up with Lucifer preparing to become God and Chloe figuring out her role as his consultant, switching their roles as Lucifer formerly served as a consultant for the LAPD Detective.

While the series has had its good and bad episodes, it has been a hit for Netflix since it debuted on the streaming service in 2019 and the final season nicely wraps up the story with a satisfying final 10 episodes.

Writer: Tom KapinosStars: Tom Ellis, Lauren German, Kevin AlejandroSummary: Lucifer Morningstar, bored from his sulking life in hell, comes to live in Los Angeles. While there, he helps humanity with its miseries through his experience and telepathic abilities to bring people's deepest desires and thoughts out of them. While meeting with a Detective in his nightclub (Lux), a shootout involving him and the Detective leads him to become an LAPD consultant who tries to punish people for their crimes through law and justice. —ahmetkozan 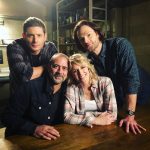